Bangalore Palace is a palace located in Bangalore, Karnataka, India, in an area that was owned by Rev. J. Garrett, the first principal of the Central High School in Bangalore, now famous as Central College. The commencement of the construction of the palace is attributed to him

In 1970, HH Jayachamarajendra Wodeyar is said to have transferred the possession of the property to two companies promoted by a civil contractor by name Chamaraju, close to the corridors of power. These companies were known as Chamundi Hotels (P) Ltd (110 acres) and Sree Venkateswara Real Estate Enterprises (p) Ltd (344 acres). But on the given date the companies were yet to be incorporated and there was no sale deed either. It was a fraudulent transaction. Jayachamarajendra’s only son Srikanta Datta Narsimharaja Wadiyar instituted a civil suit against this deal. But Jayachamarjendra Wadiyar died in 1974. The legal battle continued and in the mean time Srikanta Datta Narsimharaja Wadiyar gave 28 acres (110,000 m2) each to his five sisters namely Late Gayatri Devi, Meenakshi Devi, Kamakashi Devi, Indrakshi Devi and Vishalakshi Devi in 1983 along the Ramana Mahasrhi Road. 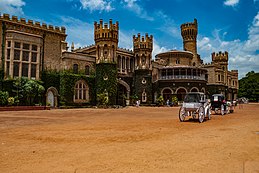 They are in possession of their respective portion and many events like Rock shows, exhibitions, marriages, tennis, cricket, golf and horse academies are conducted in those portions. Srikanta Datta Narasimharaja Wadiyar ultimately compromised with the Chamaraju Group in the years 1990 and 1994, and got back his portion of the property including the Main Palace except 45 acres (180,000 m2), which the Chamaraju group still retains along the Jayamahal Road. All along, the Government of Karnataka was making various attempts to confiscate the property under Land Acquisition Act 1894 and Urban Land (ceiling and regulation) Act 1976. Having not succeeded in their designs, the government ultimately enacted the Bangalore Palace (Acquisition & transfer) Act 1996 under Mr. H.D. Deve Gowda to expropriate the entire premises spreading over 450 acres of prime real estate in the world for a farthing of 11 crores Rupees. This dispute is pending before the Hon’ble Supreme Court of India till date as it needs constitutional issues like whether material resources of the community under Article 39(b) of the Indian Constitution covers what is privately owned. The same awaits decision by a 9 Judge Constitution Bench of Indian Supreme Court. A judgement in favour of government might lead to more such legislation for acquisition of similar properties. This is alleged to be in contrast to new Land Acquisition, Rehabilitation and Resettlement Bill, 2013 recently passed by the Indian Parliament.