he Bandra–Worli Sea Link is a cable-stayed bridge with pre-stressed concrete-steel viaducts on either side that links Bandra in the Western Suburbs of Mumbai with Worli in South Mumbai.
Address: Mahim Bay, Maharashtra 400030
Total length: 18,373′
Construction started: 2000
Opened: 30 June 2009
Architect: Seshadri Srinivasan
Location: Bandra West, Worli
Did you know: The long-awaited Bandra-Worli sea link, seen as an engineering marvel, weighs equivalent to that of 50,000 African elephants!
MORE

Marine Drive is a 3.6-kilometre-long Boulevard in South Mumbai in the city of Mumbai, India. The road was constructed by late philanthropist Bhagojisheth Keer & Pallonji Mistry. It is a ‘C’-shaped six-lane concrete road along the coast, which is a natural bay.
Length: 3.6 km
Major cities: Mumbai
Did you know: In 2014, it hosted the first R-Day Parade in Mumbai.
MORE

The Gateway of India is an arch monument built during the 20th century in Mumbai, India. The monument was erected to commemorate the landing of King-Emperor George V and Queen-Empress Mary at Apollo Bunder on their visit to British India in 1911.

The Kanheri Caves (Kānherī-guhāḥ) are a group of caves and rock-cut monuments cut into a massive basalt outcrop in the forests of the Sanjay Gandhi National Park, on the island of Salsette in the western outskirts of Mumbai, India. They contain Buddhist sculptures and relief carvings, paintings and inscriptions, dating from the 1st century BCE to the 10th century CE. Kanheri comes from the Sanskrit Krishnagiri, which means black mountain.[1][2]

The site is on a hillside, and is accessible via rock-cut steps. The cave complex comprises one hundred and nine caves, carved from the basalt rock and dating from the 1st century BCE to the 11th century CE. The oldest are relatively plain and unadorned, in contrast to later caves on the site, and the highly embellished Elephanta Caves of Mumbai. Each cave has a stone plinth that functioned as a bed. A congregation hall with huge stone pillars contains a stupa (a Buddhist shrine). Rock-cut channels above the caves fed rainwater into cisterns, which provided the complex with water.[3] Once the caves were converted to permanent monasteries, their walls were carved with intricate reliefs of Buddha and the Bodhisattvas. Kanheri had become an important Buddhist settlement on the Konkan coast by the 3rd century CE.[4]

Most of the caves were Buddhist viharas, meant for living, studying, and meditating. The larger caves, which functioned as chaityas, or halls for congregational worship, are lined with intricately carved Buddhist sculptures, reliefs, pillars and rock-cut stupas. Avalokiteshwara is the most distinctive figure. The large number of viharas demonstrates there was a well organized establishment of Buddhist monks. This establishment was also connected with many trade centers, such as the ports of Sopara, Kalyan, Nasik, Paithan and Ujjain. Kanheri was a University center by the time the area was under the rule of the Maurayan and Kushan empires.[1] In the late 10th century, the Buddhist teacher Atisha (980–1054) came to the Krishnagiri Vihara to study Buddhist meditation under Rahulagupta.[5]

Nearly 51 legible inscriptions and 26 epigraphs are found at Kanheri, which include inscriptions in Brahmi, Devanagari and 3 Pahlavi[6] epigraphs found in Cave 90.[1][7] One of the significant inscriptions mentions the marriage of Satavahana ruler Vashishtiputra Satakarni with the daughter of Rudradaman I:[8]

“0f the queen … of the illustrious Satakarni Vasishthiputra, descended from the race of Karddamaka kings, (and) daughter of the Mahakshatrapa Ru(dra)……. ………of the confidential minister Sateraka, a water-cistern, the meritorious gift.

A 494-495 CE inscription found at Kanheri mentions the Traikutaka dynasty.[12] 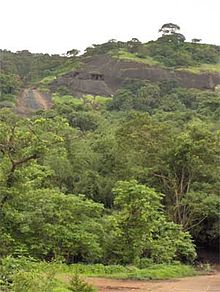 The caves as viewed from the base of the hill.

The Island of Salsette, or Shatshashthi, at the head of Bombay harbour, is peculiarly rich in rock-Temples, there being works of this kind at Kanheri, Marol, Mahakali Caves, Magathana, Mandapeshwar Caves, and Jogeshwari Caves. The most extensive series is the group of Buddhist caves at Kanheri, a few miles from Thana, in which are about 109 separate caves, mostly small, however, and architecturally unimportant.[13]

From their position, within easy access from Bombay and Bassein, they early attracted attention, and were described by Portuguese visitors in the 16th century, and by European voyagers and travellers like Linschoten, Fryer, Gemelli Careri, Anquetil Du Perron, Salt and others.[13]

They are about six miles from Thana, and two miles north of the Tulsi lake, recently formed to increase the water supply of Bombay, and are excavated in one large bubble of a hill, situated in the midst of an immense tract of forest country. Most of the hills in the neighbourhood are covered with the jungle, but this one is nearly bare, its summit being formed by one large rounded mass of compact rock, under which a softer stratum has in many places been washed out by the rains, forming natural caves; it is in the stratum again below this that most of the excavations are situated. The rock in which the caves are is a volcanic breccia, which forms the whole of the hilly district of the island, culminating to the north of the caves in a point about 1,550 feet above the sea level.[13]

In so large a group there must be considerable differences in the ages of some of the excavations. These, however, may generally be at least approximatively ascertained from the characters of the numerous inscriptions that exist upon them. Architectural features are necessarily indefinite where the great majority of the excavations consist of a single small room, usually with a little veranda in front, supported by two plain square or octagonal shafts, and stone-beds in the cells. In the larger and more ornate caves they are, of course, as important here as elsewhere. Their style is certainly primitive, and some of these monks’ abodes may date from before the Christian era.[13]

One small cave of this type (No. 81) in the ravine, consisting of a very narrow porch, without pillars, a room with a stone bench along the walls, and a cell to the left, has an inscription of Yajna Sri Satakarni of the Satavahanas of the 2nd century CE, and it is probable that numbers of others in the same plain style may range from the second to the fourth century. Others, however, are covered inside with sculpture of a late Mahayana type, and some have inscriptions which must date as late as the middle of the ninth century.[13]

The existence of so many monastic dwellings in this locality is partly accounted for by the neighbourhood of so many thriving towns. Among the places mentioned as the residences of donors to them, occur the names of Surparaka, the Supara of Greek and the Subara of Arab writers, the ancient capital of the northern Konkan; Kalyan, long a thriving port; Chemula, the Samylla of Greek geographers, on the island of Trombay; and Vasya perhaps Vasai or Bassein. Sri Staanaka or Thana itself, and Ghodabandar were also doubtless thriving towns.[13]