The Qutub Minar, also spelled as Qutb Minar, is a minaret that forms part of the Qutb complex, a UNESCO World Heritage Site in the Mehrauli area of Delhi, India.[1][2] Qutb Minar is a 73-metre (239.5 feet) tall tapering tower of five storeys, with a 14.3 metres (47 feet) base diameter, reducing to 2.7 metres (9 feet) at the top of the peak.[3] It contains a spiral staircase of 379 steps.[4] Its design is thought to have been based on the Minaret of Jam, in western Afghanistan.

Qutb ud Din Aibak, founder of the Delhi Sultanate, started construction of the Qutb Minar’s first storey around 1192. In 1220, Aibak’s successor and son-in-law Shamsuddin Iltutmish completed a further three storeys. In 1369, a lightning strike destroyed the top storey. Firoz Shah Tughlaq replaced the damaged storey, and added one more. Sher Shah Suri also added an entrance to this tower while he was ruling and Humayun was in exile.[5]

The Minar is surrounded by several historically significant monuments of the Qutb complex, including Quwat-ul-Islam Mosque was built at the same time as the Minar, and the much older Iron Pillar of Delhi.[1] The nearby pillared cupola known as “Smith’s Folly” is a remnant of the tower’s 19th century restoration, which included an ill-advised attempt to add some more stories. 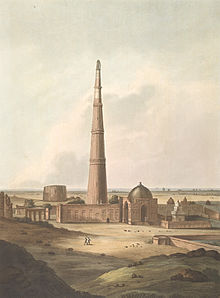 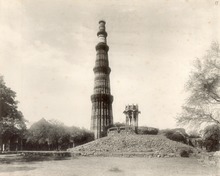 Qutb Minar in Mehrauli in Delhi. Clifton and Co., around 1890

Qutb Minar was established along with Quwwat-ul-Islam Mosque around 1192 by Qutb-ud-din Aibak, first ruler of the Delhi Sultanate.[4] The mosque complex is one of the earliest that survives in the Indian subcontinent.[6][7] The minaret is named after Qutb-ud-din Aibak, or Qutbuddin Bakhtiar Kaki, a Sufi saint.[8] Its ground storey was built over the ruins of the Lal Kot, the citadel of Dhillika.[9] Aibak’s successor Iltutmish added three more storeys.[8] Inscriptions record that spoils from 27 Hindu and Jain temples were torn down, and used for its creation. Pillars from the destroyed temples were reused and the original images plastered over.[10] Over time, the plaster has fallen revealing the original Hindu carvings. A photograph of the site, taken by Dr John Murray in 1858, is captioned as Rao Petarah’s Temple.[11] The minar’s topmost storey was damaged by lightning in 1369 and was rebuilt by Firuz Shah Tughlaq, who added another storey. In 1505, an earthquake damaged Qutub Minar; it was repaired by Sikander Lodi. On 1 September 1803, a major earthquake caused serious damage. Major Robert Smith of the British Indian Army renovated the tower in 1828 and installed a pillared cupola over the fifth storey, thus creating a sixth. The cupola was taken down in 1848, under instructions from The Viscount Hardinge, then Governor General of India. It was reinstalled at ground level to the east of Qutb Minar, where it remains. It is known as “Smith’s Folly“.[