The National Museum in New Delhi, also known as the National Museum of India, is one of the largest museums in India. Established in 1949, it holds a variety of articles ranging from pre-historic era to modern works of art. It functions under the Ministry of Culture, Government of India. The museum is situated on the corner of Janpath and Maulana Azad Road.[1] The blue–print of the National Museum had been prepared by the Gwyer Committee set up by the Government of India in 1946. The museum has around 200,000 works of art, both of Indian and foreign origin, covering over 5,000 years.

The roots of the National Museum begin with an exhibition of Indian art and artefacts at the Royal Academy in London in the winter of 1947-48.[3] At the end of the London exhibition, the exhibition curators had decided to display the same collection intact in India before returning the artefacts to their individual museums. The Indian exhibition was shown at the Rashtrapati Bhawan in 1949, and was so successful that it led to the decision to form a permanent National Museum. On 15 August 1949, the National Museum was formally inaugurated by the then Governor-General of India, Chakravarti Rajagopalachari. At that time, it was decided that until a permanent home could be found for the collection, it would continue to be housed at the Rashtrapati Bhawan.[citation needed]

The cornerstone of the present museum building was laid by Jawaharlal Nehru, the then Prime Minister of India, on 12 May 1955, and the building formally opened to the public on 18 December 1960.[citation needed]

Today, the museum is administered and funded by the Ministry of Culture and Ministry of Tourism.[3] 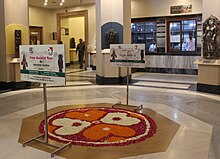 Presently, there are several departments in the National Museum.

The museum has in its possession over 200,000 works of art, of both Indian and foreign origin, covering more than 5,000 years of the rich cultural heritage of different parts of the world. Its rich holdings of various creative traditions and disciplines which represents a unity amidst diversity, an unmatched blend of the past with the present and strong perspective for the future, brings history to life.

A view of the Harappan Gallery

A view of the pottery from the Harappan gallery

The museum has various artefacts from the Harappan Civilization also known as Indus Valley Civilization or Indo- Saraswati. The whole collection of this gallery represents the advanced technology and sophisticated lifestyle of the Harappan people.

Most of the objects on display are permanent loans from the Archaeological Survey of India. Most famous among the objects are the Priest Head, the Dancing Girl[6] made in Bronze and belongs to the early Harappan period, Skeleton excavated from Rakhigarhi in Haryana, Terracotta images of Mother Goddess and Clay Pottery. Apart from these the gallery has Sculptures in Bronzes & Terracotta, Bone Objects, Ivory, Steatite, Semi-Precious Stones, Painted Pottery and Jewellery items.[7][8] Many seals have been discovered during numerous excavations. These seals were probably used for trading purposes. These seals depict bulls, elephants, unicorns, tigers, crocodiles, unknown symbols. On one of the seal, there is the depiction of Pasupati (Proto-Shiva of present age) The gallery presents the vibrancy of human civilization in India at par with the contemporary civilizations of Mesopotamia, Egypt and China.

Among the artefacts, the most significant is the Dancing Girl which is a 4.5 inch bronze statue. It was discovered from Mohenjodaro. The name Dancing Girl was coined by Sir John Marshall. It is made by the Lost Wax Method. The Chola bronzes and the Dhokra castings are still made this way.